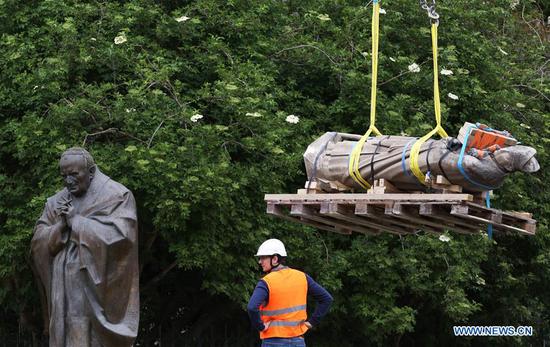 File photo taken on April 24, 2019 shows that a statue is transferred from the burnt Notre Dame Cathedral in Paris, capital of France. The cathedral in central Paris caught fire on April 15 last year. (Xinhua/Gao Jing)

Work on restoring the fire-ravaged Notre Dame cathedral in Paris is stalled one year on from the devastating blaze, another victim of the novel coronavirus.

The fire, which broke out on April 15 last year, erased the cathedral's iconic 93-meter wood and lead spire from the French capital's skyline. And it triggered Emmanuel Macron, the country's president, to declare that France would restore its treasured landmark within five years.

"We will rebuild this cathedral, together," he said then. "It's part of our French destiny. I promise to do this."

But he could not have predicted the challenge restoration teams would face one year later as the virus that causes the COVID-19 respiratory disease led to lockdowns and social distancing measures that make the work impossible.

Despite the unprecedented challenges, the army general in charge of rebuilding Notre Dame believes the 13th-century cathedral might host services again in 2024.

The challenge posed by the virus is not the first hurdle Georgelin's 40-member public committee has had to clear. Work was halted last summer because of lead contamination, and, in the fall, it was delayed by excessively strong winds that threatened to bring the skeleton of the building crashing down.

The stoppage began on March 16.

Georgelin is hoping work can restart soon but, with Macron declaring this week that the lockdown will continue until at least May 11, it is likely to be some time before teams can enter the building again.

And Georgelin told the French Senate in late January it was still unknown whether the building could be fully restored, because several difficult tasks needed to be carried out before a proper assessment could be made, including the accessing of ceiling vaults and the removal of scaffolding erected before the fire.

But Aline Magnien of the Historical Monuments Research Laboratory, the lab that is scientifically assessing the ruins, was defiant when she told Science magazine last month that "the heart of Notre Dame had been saved".

"What matters isn't the roof and vault so much as the sanctuary they protect," she said. "Notre Dame will be restored. Its artwork, stone and stained glass will be cleaned; it will be more luminous and beautiful than before."

One year on from the fire, Georgelin and his teams will be intently watching to see how long the pandemic lasts.