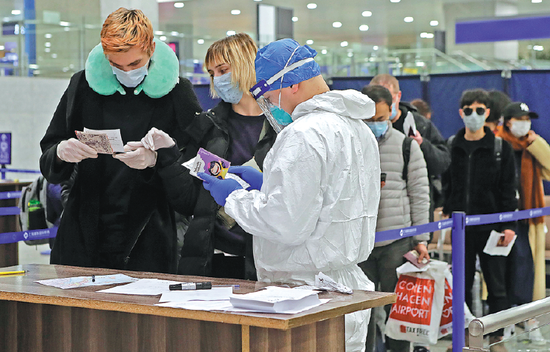 Both Beijing and Shanghai said they will adopt stricter novel coronavirus prevention measures for inbound travelers beginning Wednesday, as more domestically confirmed infections have been linked to imported cases.

Of the 78 new confirmed cases across the country on Monday, 74 were imported, according to the National Health Commission. The total number of imported cases reached 427 by Monday, and 47 of those were identified as foreigners, Foreign Ministry spokesman Geng Shuang said on Tuesday.

"China is facing a mounting threat from imported infections while the domestic outbreak has been temporarily contained. The pressure to screen travelers has been increasing, particularly in transportation hubs and major port cities," Wu Zunyou, an epidemiologist at the Chinese Center for Disease Control and Prevention, said at a news conference in Beijing on Tuesday.

Of the 74 imported cases on Monday, 31 were found in Beijing and 17 in Guangdong province. Both Beijing and Shanghai also reported their first domestic cases linked to an imported case on Tuesday.

In Beijing, a man surnamed Liu fell ill on March 11. After having a prolonged fever, he went to the hospital on Friday and was confirmed as being infected on Monday. Liu was found to have shared a staircase in his apartment building with a man surnamed Li living downstairs.

Li had returned to Beijing from the United Kingdom on March 5 and started to show symptoms of infection four days later. He was diagnosed with COVID-19 on March 12, according to a release from the Beijing municipal government.

Also, a person who was confirmed to have the disease in Shanghai had made contact with someone with an imported case during a business trip to Guangdong on March 14 and 15. The person was then quarantined at a designated facility in Shanghai on Saturday.

Facing a serious epidemic control situation, the Beijing municipal government announced on Tuesday that it had decided to upgrade its preventive measures regarding international travelers.

Starting on Wednesday, Beijing will require that all overseas arrivals take a nucleic acid test before being quarantined in designated facilities for 14 days. Travelers are expected to cover the costs of the quarantine.

All inbound international passengers have been taking nucleic acid tests for the virus since Monday.

Xin Wencontributed to this story.