When whales die, life flourishes in the deep 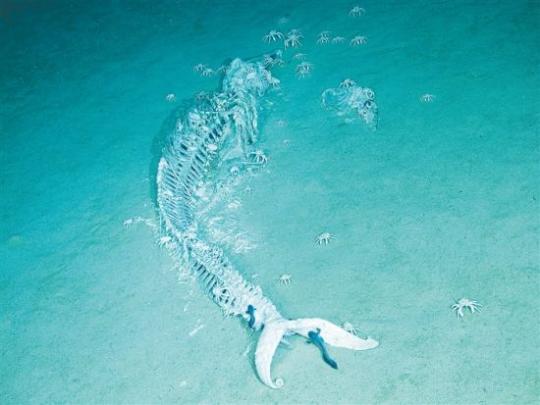 When whales die and sink to the ocean floor, their carcasses — known as whale falls — provide a bounty of nutrients for other creatures of the deep.

Chinese scientists found a whale fall among the seamounts of the South China Sea during a recent scientific research voyage. It was the first time Chinese researchers had run across this rare type of ecosystem, according to scientists with the expedition.

It was an important finding, illustrating China's progress in deep-sea exploration technology, said Xie Wei, co-chief scientist of the research team and an associate professor at Sun Yat-sen University.

During the 22-day deep-sea exploration from March 10 to April 2, 60 scientists conducted 22 dives with the Deep Sea Warrior submersible and successfully completed a number of scientific tasks. The mission aimed to gather information about the key processes of typical seamount ecosystems in the Western Pacific Ocean.

Though only about 3 meters long, the whale fall, or carcass, that was found in a seamount 1,600 meters deep in the central South China Sea, was of great value in understanding the mechanisms of the marine ecosystems that maintaining deep-sea life, Xie said, adding that it also helps promote the protection and utilization of deep-sea biodiversity resources in China.

There were dozens of white armored shrimp, red shrimp and several eels found near the whale fall. The eels were tearing away the tail muscles of the carcass.

This shows that the whale died not long ago and that the carcass was still in the first stage of decomposition and thus had rare value for long-term observation, Xie said.

Like thermal vents and cold springs, whale falls are an oasis for creatures of the deep. In the northern Pacific Ocean, they have supported the survival of at least 12,490 kinds of organisms — classed in 43 species — and promote prosperity far beneath the surface, according to data from the university's marine science school.

"The study of the long-term impact of whale falls on deep-sea life, ecological processes and the marine organic carbon cycle is an international front-line field in marine research, an area in which China is still in its infancy," Li Songhai a leading scientist with the Chinese Academy of Sciences' Institute of Deep Sea Science and Engineering, was quoted as saying by Hainan Daily.